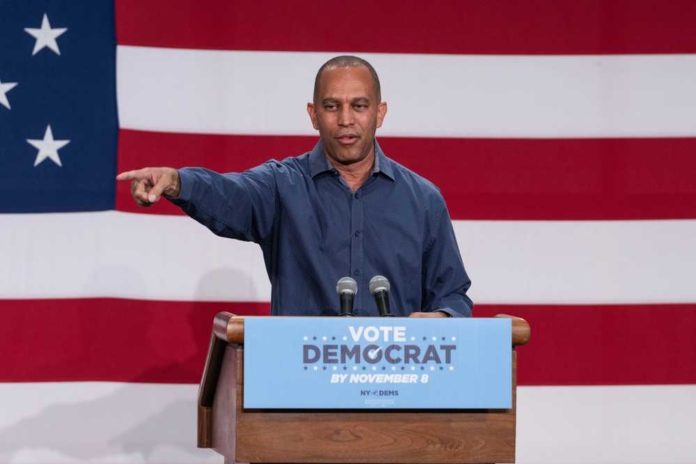 House Minority Leader Hakeem Jeffries (D-NY) castigated Republicans in a speech this week for advancing a pair of bills that he seemed to claim would somehow force American women to become pregnant and give birth against their will.

In reality, the two bills sought to respectively condemn dangerous attacks on pro-life pregnancy centers and prevent babies born after a botched abortion from being left to die.

While both measures might seem like commonsense approaches to the thorny issue of abortion, most Democrats stood firmly against both bills — including Jeffries, who rehashed an epithet previously used by President Joe Biden to describe conservative Republicans.

“On Wednesday, they made it clear they’re going to do everything possible to impose a nationwide ban on abortion, detonate reproductive freedom, criminalize abortion care, and impose government-mandated pregnancies on the American people,” he said on Thursday. “That’s what their legislation yesterday was all about — this week in extreme MAGA Republican land. That’s quite unfortunate.”

His suggestion that the government has control over whether women become pregnant received sharp criticism on social media.

Jeffries’ House speech this week further elaborated on what he sees as his party’s mission in the new legislative session, once again using the same phrase once again.

“We remain committed to try to find common ground to solve problems that the American people care about,” he said. “We also remain committed to a woman’s freedom to make her own reproductive health care decisions. That’s a big difference between House Democrats and the extreme MAGA Republican agenda.”

Although the two House-approved bills stand little chance of passing in the Democratic-controlled Senate, House Republicans nevertheless touted the achievement as evidence that they would use their newfound majority in the chamber to advance the pro-life cause.

House Judiciary Committee Chairman Jim Jordan (R-OH), who was instrumental in navigating the passage of both bills, asserted: “You don’t have freedom, true liberty unless government protects your most fundamental right, your right to live.”

Although both parties have been especially focused on the issue since the U.S. Supreme Court overturned federal abortion protections last year, the new bill’s sponsor emphasized that it was not influenced by that ruling.

“I want to be absolutely clear that this bill has nothing to do with the Supreme Court decision,” affirmed Rep. Ann Wagner (R-MO).