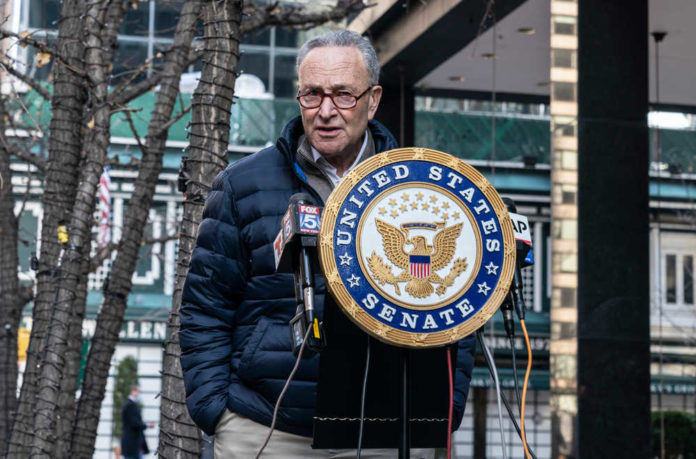 In a recent gaffe, Senate Majority Leader Chuck Schumer (D-NY) did not realize he was wearing an active microphone while speaking with President Joe Biden, and he was caught worrying to the commander-in-chief that the Democratic Party is “in danger.”

The exchange between the two Democratic leaders took place on a tarmac in Syracuse, New York, where Biden recently visited. Experts believe upstate New York will be a critical swing region in this year’s race for governor, despite historically being a blue stronghold.

That could have been the seat Schumer was referring to in his comments to the president, but from the recording it is unclear.

“We’re in danger in that seat,” Schumer told Biden.

While attempting to console the president, Schumer also referred to the disastrous performance by Lt. Gov. John Fetterman (D-PA) in the recent governor’s debate against Republican challenger Dr. Mehmet Oz.

Though Fetterman raised eyebrows during the debate due to his trouble communicating, Schumer seemed to believe Democrats were still faring well in Pennsylvania.

“The debate didn’t hurt us too much in Pennsylvania,” Schumer said. “So that’s good.”

He also said Democrats were “picking up steam” in an unspecified Nevada election race.

As Nov. 8 approaches, Republicans continue to poll strongly, with many experts predicting a clear Republican takeover in the House of Representatives and a possible sweep in the Senate.

While Americans have made it clear in polls that they most value the state of the economy when it comes to how they will vote in this year’s elections, Democrats have struggled to answer for their disastrous policies, which have left the economy in shambles and inflation at a record high.

While Democratic candidates struggle to answer questions, the party’s leader has taken to denying and lying.

While licking ice cream at a Baskin-Robbins in Oregon recently, Biden said he was not concerned with the American economy because it is “strong as hell.”

On Thursday, he told an audience at a community college in Syracuse, New York, that he was responsible for lowering gas prices from the $5 per gallon mark it was at when he took office.

Cruz roasted the president for the comment, calling it “a blatant lie.”

The American people, regardless of political affiliation, are picking up on the Democrats’ destructive policies and incompetent leadership; November should be a reckoning.